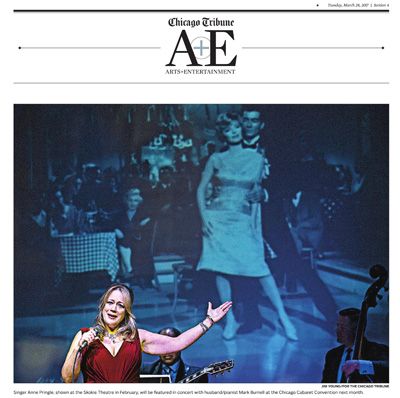 “The music-making couple has been married for more than 20 years but a few days ago Anne Pringle, the singer/wife, was compelled to take a trip back some 30 years to a club that no longer exists. Mark Burnell, the pianist/husband, listened as she said, "I don't regret a thing."
- Rick Kogan,

“Yvette was then the site of a talent contest being held over four Sundays. I was a judge along with pianist Al Blatter…one of Yvette's waitresses got up and sang. After a couple of minutes Blatter looked at me and said, "She wins. No contest." We have been watching and listening ever since as she has carved a fine career and met her musical mate.”
- Rick Kogan,

“Once upon a time, scores of songs that became standards were created in one Manhattan structure. Celebrated cabaret artists Anne and Mark Burnell will take audience members to that time and place when they present "The Brill Building Songwriters,...
Almost all of the songs in the show are from songwriting duos, including Leiber and Stoller, Goffin and King, Mann and Weil, Bacharach and David, and Sedaka and Greenfield..".
'Mark Burnell was drawn to this project by "the fascination of the building as a giant music factory. It's 10 or 11 floors and in its heyday there were over 160 music businesses — from composition to producing to recording studios. There were all these rooms with a piano and a chair, and all these composers writing songs at the same time. The sound was bleeding through the walls and they were hanging out together and having romances and inspiring one another.”
- Duo Shares Songs that came out of Brill Building, Myrna Petlicki,

“presented by the husband and wife team of Anne and Mark Burnell and will focus on the music that was written during that time which was performed by such artists as James Taylor, Paul Simon, Bobby Darin and many others.”
-The Brill Building Songwriters,

“While Anne and Mark Burnell may be best recognized for their excellent individual and shared jazz performances, in The Brill Building Songwriters they present a most entertaining evening of pop classics. Opening with “Make Your Own Kind of Music” (Barry Mann/Cynthia Weil) set the lively tone. The Brill Building housed songwriters as early as the days of Tin Pan Alley, then through the heyday of rock and roll. The Burnells focus on the productive pop/rock period from the ‘60s and ‘70s...Closing with Carole King’s “You’ve Got a Friend” and Bacharach/David’s “What the World Needs Now Is Love” felt just right. After all, it is so often pop music reminds us of our first loves.”
-Anne &amp; Mark Burnell: The Brill Building Songwriters, Carla Gordon,

“One of the great things about Mark is how he uses his skill and instincts as a jazz improviser to adapt to any situation, even one that contains no jazz at all.”
-Mick Archer,

“Her unadorned artistry is on full display on the dramatic “A Time For Love.” Accompanied only by producer and arranger Henry Johnson’s shimmering resonant guitar lines Burnell’s evocative enunciation of lyrics drips with heady poetry.”
–

“Her supple, honeyed vocals flow along the undulating instrumental refrains of the band with splendid, smooth sophistication.”
-

“Burnell maintains her singularity by avoiding being pigeonholed. She proves herself, once more, adept at a variety of genres to all of which she brings a jazz musician sensibility.”
– Cry Me a River: A Julie London Tribute at the Skokie Theatre Feb 24th,

“Is there something in the water? Maybe Anne Burnell has imbibed a magic potion that makes her voice better supported, elastic, and more alive than ever. Burnell is singing higher than before, which fleshes out her sultry sound with some lacy feminine tones.”
-Carla Gordon,

“Anne’s latest, the gloriously diverse and whimsically titled Summer Days & Dreamy Nights, celebrates not a single composer but a singular friendship between the singer/songwriter and renowned Windy City based jazz guitarist Henry Johnson, who produced, arranged and plays electric and acoustic throughout the 13 track set.”
-Jonathan Widran,

“Burnell’s engaging performance style instantly grabs the ear, and she does here what she does so well, not so much perform her musical choices as sharing them with us.”
- Jeff Rossen,

“ Anne and Mark Burnell proved you don’t need a piano when you sing a cappella this well.”
-Howard Reich,

“Blues In The Night” and Ms. Burnell is a marriage of two talents that needed to join hands. Her voice fit’s the style and with arranger Bob Ojeda ‘s direction the end result was enchanting.
– Karl Stober, E-Jazz News

“If there’s ever to be another Jackie Cain and Roy Krall -- it is to be in the person’s of Anne and Mark Burnell”
-Larry Smith, WBEZ 91.5fm,

“They are just so right together musically and so relaxed and real in their informal interaction with each other that you feel by the end of the show that you have come to know them. “
Jan Wallman, Applause, Applause!, NY

“When he's not at the piano, Mark moves center stage with Anne and doubles as string bass -- not on string bass but, with just voice and musicianship, providing melodious and rhythmic back up.”
-Peter Haas,